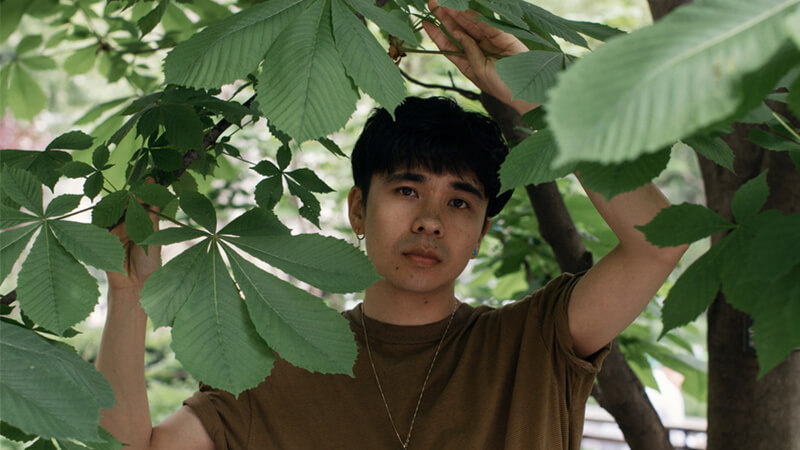 In Conversation With Poet And Writer Ocean Vuong

“I first came across Ocean Vuong’s work shortly after a divorce. I found his book Night Sky With Exit Wounds at a time when I was being taught to let go, among other things. The care with which Vuong writes about loss, grief, and love is both masterful and graceful. I had the privilege of speaking to him about abandoning heteronormativity, and vulnerability as a form of strength and freedom…” – Glenn Lutz

G: Congratulations on Time Is A Mother and thank you for the space you created around loss. In your poem Old Glory, you recontextualise phrases embedded in American culture, as seen in the lines, Knock them dead, big guy. Go in there, guns blazing, buddy. You crushed at the show. No, it was a blowout. No, a massacre. Total overkill. We tore them a new one. What was the intention of that poem? When discussing the work on Louisiana Channel you said, “Heteronormativity could be abandoned if you have the courage to.” I’d love you to delve deeper into this.

O: That poem is perhaps the one I am most proud of. It took me the entirety of my writing life in order to write that piece. I had to gain the confidence to let the language speak on its own terms, even when it displays the violence embedded in masculinist culture. But that was my hope for this poem. To me, a poem can’t always be a ‘beautiful thing’. A poem, like a good song, can also provoke, incite, and interrogate. And using the sonnet form to ‘stack’ these otherwise common phrases into a kind of concentrated and horrifying speech act was something only the poem, as a technology, could do. So I’m proud of that. As for whether heteronormativity could be abandoned, I think it’s hard living in a culture that conditions us toward a narrow definition of ‘success’ or ‘good’ or ‘right’ or ‘wrong’. It does take courage to break away from something so powerful. And even more so, to realise, with compassion, that those who are trapped in it, even when appearing powerful, are being hurt by it as well. It is not so much that one system of thinking is worse than the other – that depends on the individual – but it’s about widening what is acceptable so that everyone can find a footing that works for them, that ontological expression can be as varied as people themselves. Imagine if, in order to be a ‘successful’ musician, you had to play only classical music. How boring! In the same way that classical music is not ‘wrong’, I don’t think heteronormativity is wrong, but I need it to make room for other [genres of music], which, historically, it has not.

O: I think when we approach vulnerability as a common and perhaps even natural condition of our species (we are, after all, a relatively soft and physically defenceless species, hardy in groups and wilting when isolated), we’re able to connect with each other in a less superficial way. You realise that, especially in adults, when the masks of strength have been forced on us, or when we’ve calcified them through conditioning, we mostly operate in the community with performances of strength and success – when, in fact, we might very well be full of doubts, anger, fear, and grief. So giving each other permission to put down the shields in order to see each other’s faces more clearly is a gift. Vulnerability is as true and connected to us as our skin. Everything else is fabric.

G: Lastly, death. You’ve written about it with care in your work, and like so many of us around the world, you have had to navigate the pain and grief that death imparts. I understand that you live across the street from a cemetery and that Maranasati, the Buddhist death mindfulness practice, has helped with your mental health…

O: I think all cultures have various versions of Maranasati or memento mori as the Europeans called it. We hear death awareness teachings in the Quran, the Torah, and the Bible too – and the effect is one that shatters the illusions of permanence in materials and even social material things (such as status, fame, position, etc). The ultimate death meditation comes when you witness a loved one pass away, as I have a few times now.

Our culture often encourages us to ‘move on’ from the memory of the deathbed. We cover the body as soon as it becomes a corpse as if the transformation is too complete – too total – to bear. But I think experiencing death in that way can be quite a gift in that we can go back to that moment and have it teach us inexhaustibly about how to live. When we watch a loved one die, we don’t think about our wealth, or goods, or achievements, or our career; we are totally present for them. It is an act of giving, the waiting for death. We give them all of us, at the last of them. That’s an incredibly generous thing and I think if we live our day-to-day lives the way we live at the deathbed, we might actually live more sustained, happy, and conscious lives.

During their conversation, Glenn asked Ocean Vuong about the music he listens to as a form of self-care. Here is the Spotify playlist Ocean shared with us