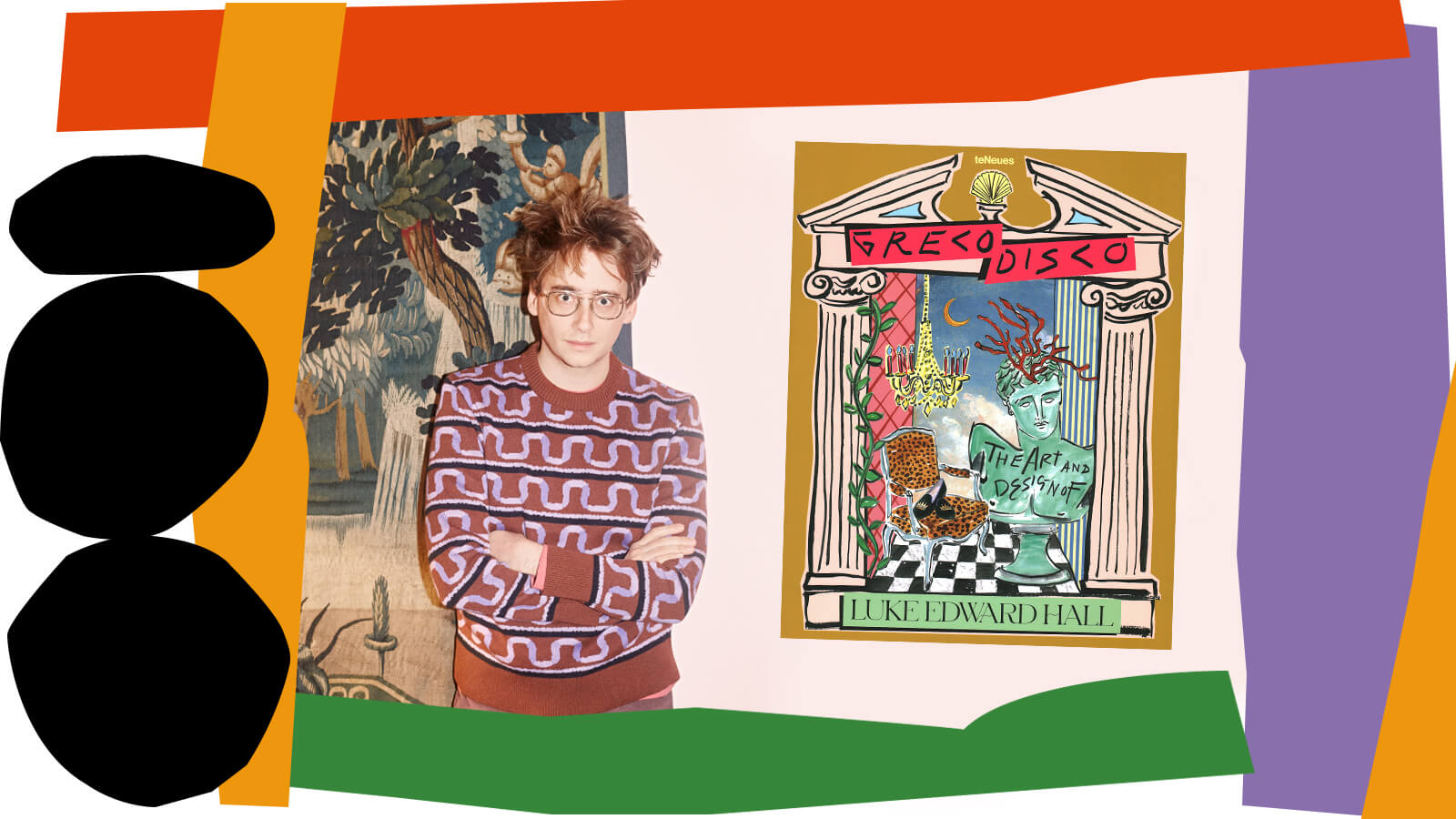 In the second part of our series where we look at the things, places and people that inspire a creative’s working life, journalist Marie-Claire Chappet spoke to the beloved British interior designer about everything from his best career advice to the most inspirational accounts to follow on Instagram

In the last seven years, Luke Edward Hall has become a byword for chic interiors. His signature style – caught somewhere between a Wes Anderson movie and a Bloomsbury Group fever dream – can be seen in his artworks (he exhibits paintings and drawings internationally at the Athens gallery The Breeder) and his own fashion and interiors brand, Chateau Orlando, which he launched this year. Since graduating from Central Saint Martins in 2012, Hall has injected a sense of boundless creativity into the worlds of fashion, art and design, working with major brands and institutions, from Burberry and Lanvin to the Royal Academy of Arts and the V&A.

In 2019, he published his first book – Greco Disco: The Art & Design Of Luke Edward Hall – and, in 2020, he finished his first major project in Paris, Hôtel Les Deux Gares. The result is a bold and colourful 38-bedroom hotel and bistro full of stripes, sketches, quirks and delights. Hall is now also a columnist for The Financial Times and, alongside running Chateau Orlando, is working on his second book.

On his working soundtrack… Music can help me enter a kind of trance-like state, which is beneficial when I’m painting and drawing. I’m into experimental, futuristic pop music and am a big fan of producers such as AG Cook. However, sometimes I just want to listen to a six-hour-long mix of ambient Hobbit bops. Or Enya!

On his process… I begin working from the moment I wake up, but I take breaks throughout the day so I can have a long bath, make lunch and walk my whippet, Merlin. I work in my studio, which is on a farm about 10 minutes up the road from where I live on the Oxfordshire/Gloucestershire border and have no close neighbours apart from cows. I don’t set myself rules as such, but I do try to leave my phone alone after 9pm. I enjoy spending an hour or so reading before bed and filling my head with ideas before I fall asleep.

On inspiration… The Hand Of God is a film that really left an impression on me. It was so incredibly moving. I scroll online for daily bits of inspiration – I love the accounts @weird_walk, @bibleofbritishtaste, @a.prin.art,
@florence.knight, @larry_stanton_art – and I take huge inspiration from other artists and creatives such as the Bloomsbury Group, Jean Cocteau, Christopher Wood, Picasso, Cecil Beaton, Oliver Messel, Stephen Tennant, Elsa Schiaparelli and Denton Welch.

On prized possessions… My studio is mostly filled with bits of miscellaneous tat that I love, but I’m probably most attached to my collection of old and rare books and magazines. I particularly love my old copies of L’Uomo Vogue and Casa Vogue. I’m also obsessed with a large drawing I own by Duncan Grant; it’s of Paul Roche, standing in what looks like a clearing in a wood. He appears to be sprouting devil horns. It’s a beautiful, tender piece.

On fashion and beauty… I like workwear from companies such as Old Town or old sweaters and hand-dyed cotton shirts that I buy from a farm shop near Cirencester. I buy a lot of vintage clothes to wear but also for research for my brand, Chateau Orlando: waistcoats, knitwear, suits... Clothing for me is a way of expressing myself, much in the same way as decorating a room is about projecting an idea. I also enjoy changing fragrances. At the moment, I’m wearing Dries Van Noten’s Jardin de L’Orangerie, which comes in a sublime acid-yellow and violet glass bottle.

On travel… I love Italy for its architecture, people, food and history, and Greece for its ancient myths and legends. But I also enjoy taking much inspiration from my own landscape and folklore in the UK, particularly that of the West Country, where my mother’s family is from.

On his career… The best advice I ever received was: “Keep your blinkers on. Like a horse,” [so you only focus on what you’re doing,] which I just love! I’m so happy to be doing what I do but if I wasn’t doing that, I think I’d work with food somehow. I love the idea of being a food writer.