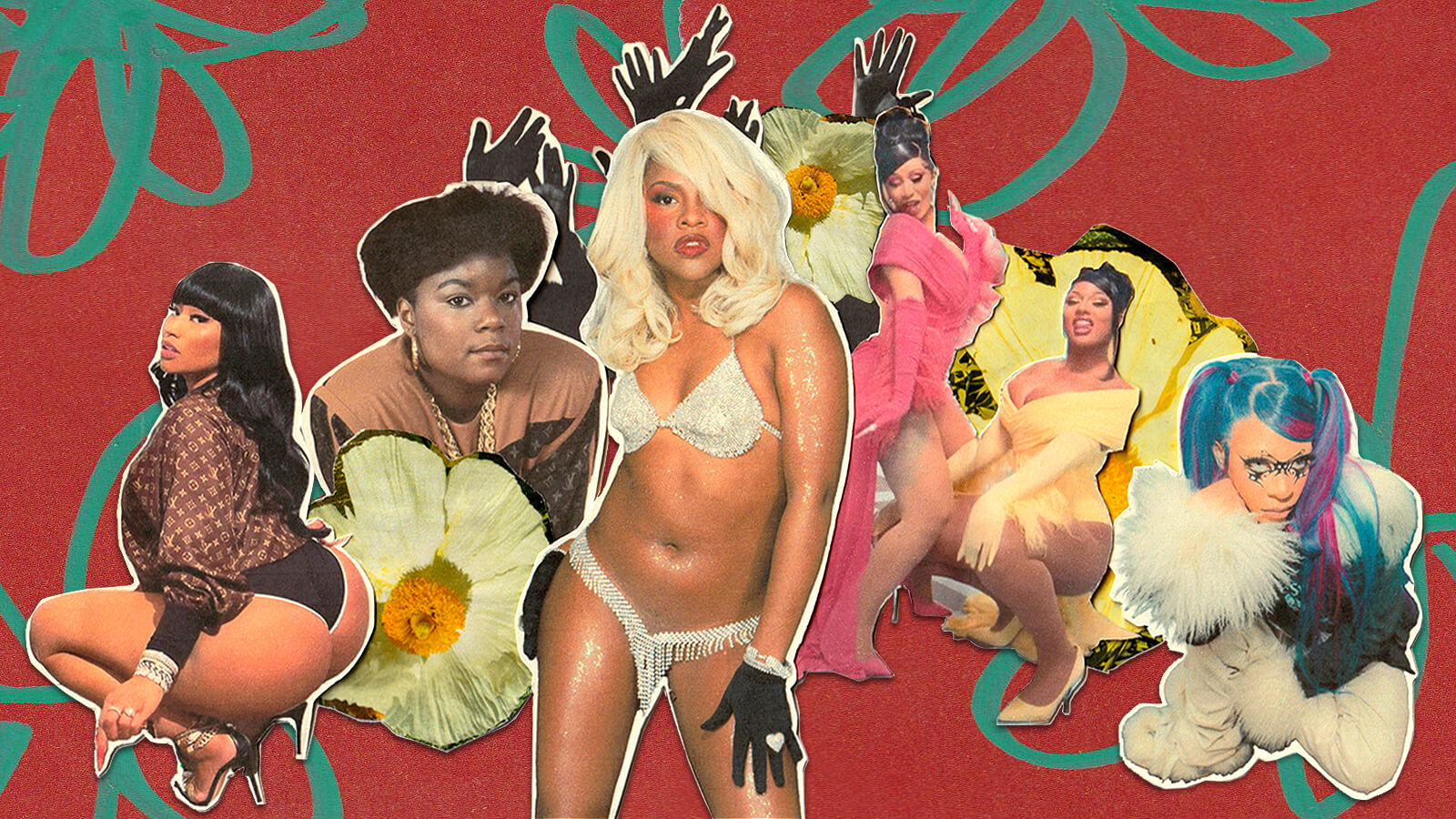 For Women In Hip-Hop, Their Greatest Opponent Is Still Misogyny

In July of 2020, Megan Thee Stallion alleged, following a party at Kylie Jenner’s home, that she was shot in the foot by fellow rapper Tory Lanez. A media frenzy ensued, in which there was more doubt cast over whether the shooting actually happened – coupled with callous derision – than support for Megan, even in the face of her taking to Instagram Live and crying over the incident. Less than a month later, Megan and Cardi B released the chart-topping single WAP. The internet’s overarching theory? That the earlier incident was a publicity stunt to promote the song. Forget the actual video footage of Megan limping and leaving a trail of blood; the key takeaway was that her success needed to be escorted by tragedy and abuse in order for it to work.

Misogyny, or more specifically misogynoir – where sexism and racism intersect – has been a part of hip-hop since its inception. Back in 1987, the South Bronx-based trio Boogie Down Productions (BDP, comprising KRS-One, D-Nice and the late Scott La Rock) were enmeshed in a cross-borough war in New York City, battling rival posse The Juice Crew in Queensbridge. BDP released the fiery diss track The Bridge Is Over, on which they targeted the barely legal Juice Crew first lady Roxanne Shanté with the line, ‘Roxanne Shanté is only good for steady fuckin’’.

For a born battle rapper like Shanté, those words cut like a knife. Her start had come at 15 years old, when she boldly challenged Brooklyn hip-hop group UTFO for their song Roxanne Roxanne, a track on which they chastise a woman named Roxanne for not complying with their advances. Shanté assumed the identity of Roxanne, releasing the response track Roxanne’s Revenge, and kicking off a career of standing tall against male competitors and their attempts to belittle women. Three years after Roxanne’s Revenge, she was reduced to just one thing on The Bridge Is Over – and it wasn’t her lyrical prowess. This marked a precedent of misogyny in hip-hop. And unlike The Bridge, it was far from over.

“Never mind her razor-sharp lyrics; she is regularly instructed by her own fans to pop her ass instead”

Fast forward 35 years, rapper Rico Nasty revealed in an interview with XXL magazine that during her concert performances, audience members frequently hold up signs on their phone screens that read ‘TWERK’ while she’s attempting to rap for them. She admitted in that same interview that the demands for dancing on command are perhaps the “worst thing” you can ask of female rappers while they’re performing. Never mind her razor-sharp lyrics; she is regularly instructed by her own fans to pop her ass instead.

Rico had already endured a stressful 2021, supporting Playboi Carti on his Narcissist/King Vamp Tour, where Carti’s predominantly young white male fans chanted Carti’s name loudly during Rico’s set; at one point a bottle was thrown at her. (She later sparked concerns for her mental health in a since deleted flurry of tweets in which she revealed she had been crying herself to sleep on the tour bus every night. She wrote: ‘I wish I was dead as much as y’all do, trust me.’) This is all the kryptonite of any female rapper. Their goal is to promote their art, yet gestures such as those endured by Rico can completely dismantle the framework of any female artist as she tries to manoeuvre in a male-driven industry.

Throughout hip-hop history, the concept of misogyny has existed on a spectrum, dictated by the whims of the male gaze. In rap’s earliest days the stakes were lower. Hip-hop wasn’t the multi-billion-dollar empire that it’s become, so the instances of misogyny were relegated to the trope of taking another man’s woman. The culture was still growing, and in an effort to facilitate the ascent of men, women played nurses in the game of war – often cast to the side should they assume a soldier status. Gradually, the mistreatment snowballed. As male rappers made millions, they kept a lady beside them as a prop, oftentimes in the form of ‘video vixens’, while their subject matter in songs grew more and more grotesque, punctuated with calling women bitches (among other things). The concept of having a ‘first lady’ in a hip-hop crew was a novelty move, though the moment she became empowered, rules were put in place to dismantle her credibility.

“Kim demanded sexual dominance, the same luxuries as men, and assumed her role as a leader, which many read as emasculating”

We watched this happen in 1996, when Lil’ Kim first left the fellas of Junior M.A.F.I.A. to become a star. Her solo debut album Hard Core was a feminist manifesto, as Kim demanded sexual dominance, the same luxuries as men, and assumed her role as a leader, which many read as emasculating. She was labelled ‘raunchy’ and pitted against other women on the scene including Foxy Brown. She was even falsely accused of not writing her own rhymes and accused of existing in the shadow of The Notorious B.I.G. – even well after he died in 1997. Above everything else, it was a power play.

For Lil’ Kim, her meteoric rise gave way to a heightened level of scrutiny for what she was rapping about as if she wasn’t allowed to. This all arrived at a time when men in the rap space were just upping their tax brackets, and the crux of their rhymes were about drugs, sex and money. When Kim rapped about those same topics, it was categorised as ‘dirty’.

That didn’t thwart the conversation; if anything, Lil’ Kim kept it going as her career evolved. Her perseverance set a standard for female rappers, inspiring the continued outspokenness she still stands by today. Other artists such as Trina, Nicki Minaj, Cardi B and most recently Megan Thee Stallion have all taken this approach as it pertains to sex and sexual dominance in song. Contrary to popular belief, it isn’t to merely talk about sex; it’s putting the power back in women’s hands.

This has made millions for hip-hop, and there are now many women out there doing it. That said, women are still having to defend their self-expression. Some 25 years ago, a label was coined for the type of music Lil’ Kim made. It was called ‘hypersexuality’, denoting a heightened level of sexuality beyond the categorical norm. That term has now evolved into ‘sex positivity’, which wasn’t a hip-hop decision, really. Rather, it was a reflection of a societal change in perspective, where even industries such as sex work have received a complete narrative flip from earlier days.

Times are changing, yet in an industry like hip-hop, the aversion to hearing women discuss sex remains a part of the imbalance. Groups including the City Girls have challenged this lack of logic, pointing out that once women took ownership of the very subject matter men previously used to weaponise them in song, widespread umbrage was taken. Nicki Minaj has echoed a similar sentiment, also questioning why an artist in her position is rarely brought into the ‘GOAT’ conversations, yet men who have done far less than she has have a welcomed seat at that table.

Today, the root of misogyny in hip-hop boils down to dominance. The success of female rappers has reached a fever pitch, where there are more successful women in the rap space than ever before. Women are winning at what is historically a ‘man’s game’. The lyrics once used by male rappers to control and minimise women are now the ink in the pens of female rappers. They are in control of their own narrative, which poses a threat to men (and unfortunately some women), leading to misguided outrage. This causes a ripple effect of misogyny in hip-hop, fuelled by criticisms from the media, artist peers, record labels and social media/fandom, which has prevented this problem from ever reaching extinction.

We saw this in full form when Cardi B and Megan Thee Stallion released the aforementioned WAP in 2020. They were excessively criticised for their song’s content and the sample they used from DJ Frank Ski, which includes the chant ‘There’s some whores in this house.’ It was fine when Frank called women ‘whores’, but not when Cardi and Meg sampled it and tacked on the word ‘pussy’ in the hook.

The chart-topping WAP led to an evolution of the ‘hypersexual’ conversation, with their music being dubbed ‘pussy rap’ and ‘stripper rap’, emphasising that an overzealousness for talking about sex is not only demoralising to hip-hop, but also sending the wrong message to the world. We could sit here all day and comb through old 2 Live Crew lyrics or count the number of times male rappers have used the words ‘bitch’ and ‘ho’ to somehow defend whatever it is that the critics feel Cardi B and any other sex positive female rapper is doing. It would be futile, however, and would probably never change the outcome.

Over the past four decades, there’s been a hope (rather, a wish) that over time, the contributions of women in hip-hop culture would eclipse the stereotypes thrusted upon them by both men and women alike. Gradually, we’ve watched female rapper success stories come to light more frequently. This goes some way towards eliminating the narrative that ‘there can only be one’, or that if more than one woman exists in a space, then they absolutely have to hate each other. The latter sentiment really speaks to the fetishisation of women fighting. It doesn’t hurt the bottom line of marketing departments at record labels, either. That’s one part of the sexist spectrum; tokenising and othering women while suggesting they’re too emotional to handle competition. The other part involves women’s discussions on sex, sexuality and their own bodies, in a world that has arguably kept them in a holding pattern of misogyny.

So, here we sit in a world where hip-hop is the dominant genre in the music industry – it accounts for the most success and responsibility in the pop stratosphere and is worth billions of dollars. At the same time, we see more women succeeding in the genre than perhaps we ever have. Both truths can co-exist. As hip-hop turns 50 next year, the only way for this non-linear judgment to wane is by understanding that women are not monoliths: not in song, not in persona, not in life. This involves men surrendering some degree of power. Will that ever happen? Who knows. But one thing is for certain: women don’t plan on stopping.

kathy iandoli is a critically acclaimed journalist and author of the books God Save The Queens: The Essential History Of Women In Hip-Hop, Baby Girl: Better Known As Aaliyah, and the forthcoming Lil’ Kim memoir, The Queen Bee. She is also a professor at New York University